Back to Basics Approach

E1 may be our lowest cost media playout solution, however, it still provides many of the important features needed to insure a successful event.

Everything needed for operation is contained in one easy to follow resizable window. 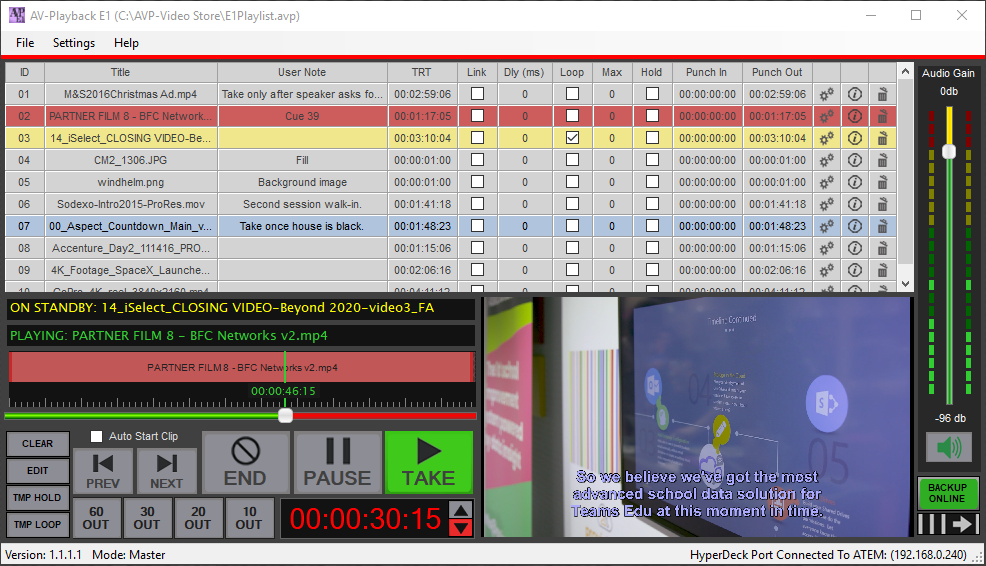 The Little Engine That Could

In order to offer such an inexpensive, playout solution, some sacrifices had to be made such as an independent preview engine, multiple layers, and any crossfading transitions. However, this streamlining did enable us to create an extremely reliable GDI based video engine that will not suffer from possible system compatibility issues sometimes associated with DirectX based graphic renderers. It is also incredibly efficient in its use of available system resources enabling you to still playback very high-resolution videos smoothly even on lower cost and less powerful laptops.

The default option is to pre-buffer ahead of time all media elements contained in the playlist. This provides the highest level of agility and smoothness of playback when needing to aggressively make rapid selections all while media is playing. However, the price paid for that agility is much more of ram memory is absorbed meaning your computer needs to be well equipped with at least 8 to 16GB of RAM.

For systems that are not as well equipped, you can opt to not pre-buffer. In this situation, each clip is only loaded when selected. This dramatically reduces the amount of system memory needed. Although there is a downside to this, in that it requires more time between selections to load media into memory. It is only recommended that option only is utilized if only occasional playing of media files and there is ample time in between to set for your next cue.